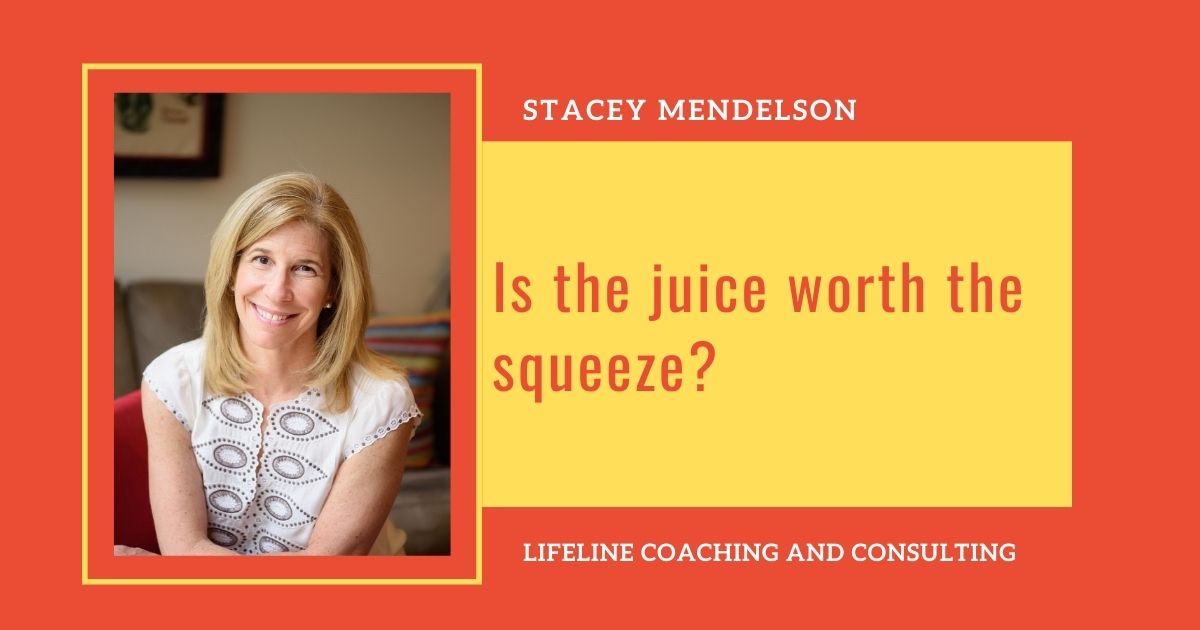 Is the juice worth the squeeze?

The best question you can ask yourself before taking action when you are in a high-conflict divorce is: Is the juice worth the squeeze? Is this a fight worth having?

This means taking an objective look at things from a cost-benefit perspective to decide if your plan makes sense. Asking this question will save you a lot of money and heartache in court.

Conversations about the kids

Before you engage in a discussion about the children with your high-conflict ex, ask yourself what you can expect to receive from him/her and will it help your child in any way?

Here is an example. My client’s young son came home from the last visit with his dad acting strange. Eating with his mouth open to show his food, and drinking like a dog. Any attempts in the past to discuss the child have been met with hostility and blame from her ex. The is no juice in attempting another discussion about this. It is better to just manage this behaviour herself.

On the other hand, a client’s young daughter came home to tell her that her dad’s partner owns a gun. This definitely warrants a written discussion about the presence of guns in the house. Even if the ex is obstructive or rude, this is about child safety, and the email thread can be used as evidence if he refuses to adhere to her requests to remove all firearms from the home.

I can never tell you if the juice is worth the squeeze in your situation – that is completely up to you. But let me give you a few things to consider. Battling it out in court to have sole decision-making over the children is a difficult and expensive mountain to climb. Make sure you like your reasons!

Your ex being a dickhead may not make the juice worth the squeeze to spend a ton of money to have decision-making authority. Perhaps there is a more stealth way to achieve your goals such as a parallel parenting plan.This will enable you to have sole decision-making in one aspect of your child’s life like medical or education.

In my case, I was the CEO of our son from the day he was born. After separation, I just continued to make the major decisions about his medical and education. My ex did not like it and his lawyer sent all sorts of letters claiming alienation but I didn’t really care. My son was out-ageing the custody system so I let it ride  Perhaps if your child is the right age, you can continue to make the major decisions without having the title of sole decision-maker.

Again – one must decide if it is worth the expense to go to court or mediate to get a low level of support from your ex who likely will not even pay. For me, the juice was not worth the squeeze. Why would I want to rely on someone who is totally unreliable? I would rather put the effort into my own income potential.

If you have an ex who is a high earner, and you meet the requirements for spousal support, there is a lot of juice in having strong counsel fight for your support position.

With regard to child support, this is actually your child’s birthright. One needs to consider the impact on your child if you choose not to pursue this. If you know you have a reluctant Payor, think creatively about how to extract a lump sum contribution for your kid’s post-secondary education. That juice is worth the squeeze but fighting it out in court years later may not be.